The pulp mill in Rosenthal has an area of about 900,000 m² and height differences of about 70 meters. Although bicycles are also used to move around the mill, motorized vehicles are required for most activities, for example to transport tools and spare parts.

The Rosenthal plant has a fleet of around 100 vehicles. Of these, approximately

In 2017, an analysis of this fleet was conducted and it was found that 4 different engine systems are used in these vehicles:

At that time, management initiated a project to gradually convert the fleet to environmentally friendly drives. The project was launched in 2018 under the leadership of Maik Glüher, Head of Logistics, and completed in 2020; the first implementations were already made during the project period.

What are environmentally friendly drives?

Either electricity or hydrogen. Hydrogen propulsion with fuel cells is technically developed, but there are hardly any vehicles to buy; moreover, Rosenthal does not (yet) have a hydrogen filling station. Electricity is an obvious choice, especially since Rosenthal, like all modern pulp mills, generates large amounts of surplus electricity. Moreover, since this electricity comes from renewable sources, namely from the combined material/energetic use of wood, the electricity can be considered green electricity. Thus, it can be said that the electricity-powered vehicles used by Rosenthal are emission-free.

For the current phase this meant that when replacing cars, small trucks, and two-wheelers, in each case it was checked whether a replacement vehicle with an electric drive could be purchased.

Thus, in 2018, 2019, and 2020, a total of 12 cars and light trucks with electric motors and one electric scooter were purchased. The vehicles have proven to operate without problems and can be recharged either overnight or in between usage (for vehicles used in shift operations). 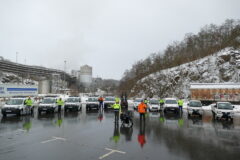 Managing Director Leonhard Nossol and Head of Logistics Maik Glüher (front row) with the drivers of our e-vehicle fleet.

The composition of the engine systems has changed as follows: 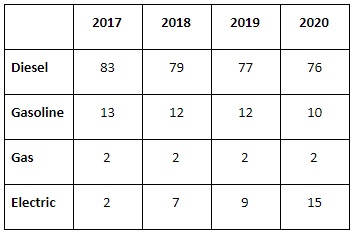 What can be the next steps?

An analysis of the conversion potential shows that 70 – 80 % of Rosenthal’s vehicles are convertible in the short term. Each time a vehicle is replaced, it is checked whether it is possible to convert to zero-emission drives.

For the workshops, it would make sense to create a large, central, covered parking lot where a number of charging stations corresponding to the parking spaces would be installed. The internal cars and light trucks as well as two-wheelers will be converted step by step; for the cars also used outside the mill premises, options such as hybrid drives or fuel cells are to be examined. There are already 2 fuel cell-powered cars on the market, but they are still very expensive and the area-wide coverage with hydrogen filling stations is not yet satisfactory. For 2021, the replacement of another 5 vehicles with combustion engines by new vehicles with electric drive has been planned in the budget.

In the medium term, it is well thinkable to generate hydrogen from Rosenthal’s surplus electricity and run an own hydrogen filling station.