In October 2018, Mercer International Inc. acquired Alpha Santanol Pty., a plantation and distillation company in Western Australia that grows, distills, and sells Indian Sandalwood oil. As the company specializes in sustainable practices to produce one of the oldest and most valuable essential oils in the world, Santanol’s acquisition was a natural progression for Mercer as we delve more into the world of wood extractives – and the fact that Santanol believes and values sustainability as much as we do made it the perfect fit.

Santanol was, and continues to be, an answer to combating unethical harvesting practices of East Indian Sandalwood (Santalum album). During the late 1990’s, the Australian government started to consider hosting Sandalwood plantations in the region of Kununurra, the northern part of Western Australia. The rich water resources and tropical temperatures made the region a strong candidate to aid in cultivation after years of overharvesting in other countries of the world. Through the support of Santanol’s Research and Development Centre, they developed methods to help Sandalwood adapt to and thrive under Australian climate conditions. The R&D Centre is continuously developing new methods to ensure the most efficient usage of resources to create the highest quality trees. It was a company that Mercer was excited to bring on board and we are happy to have been on this journey together.

With the acquisition came the question: is it time to rebrand Santanol? Santanol’s logo, at the time of purchase, resembled a Sandalwood oil drop as it was being distilled, with steam from the distillation process coming up around it to the top. The styling and colouring was inspired by Sandalwood oil’s origins in Asian cultures, as the oil is indispensable in both modern and ancient rituals and religions.

Mercer was interested in growing and updating the brand, but an entire rebrand was a bigger conversation. The question was raised to customers and team members, where a lot of mixed reviews came in. The current branding was considered a bit “old-fashioned” – yet the Santanol drop is well known in the market so a complete change wasn’t the goal either. Instead, the goal was decided to touch up and modernize the Santanol drop in a way that current customers recognize the company they’ve come to love while drawing new customers in.

The Santanol drop was integrated more into the Santanol logo, emphasizing on the purity of the Sandalwood oil. The colour palette also got a refresh, shifting from its Asian origins to Santanol’s Australian roots, embodying the very colours that can be found in Santanol’s plantations. While Santanol did have a tagline for marketing purposes, “Pure Sandalwood”, the team felt a piece was missing and wanted the logo to proudly show what Santanol stood for in its operations: Pure. Ethical. Sandalwood. Hence, the new tagline was created and beautifully incorporated into the new logo. 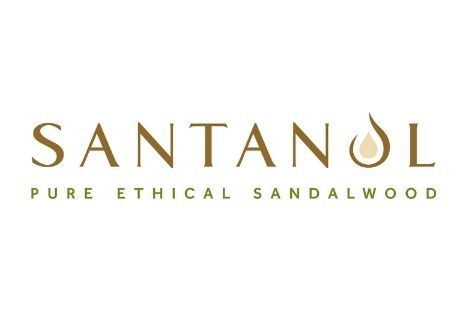 With the new logo and branding, the next step in the rebrand was an updated website. The same group that encouraged a modernized Santanol brand recognized that the existing site was quite text heavy and populated with lower quality pictures. While informative, it sadly did not invite customers to stay and learn more of the great information that was being shared. Taking the new logo and tagline, Santanol was able to engage Red Roses Communications, a Hamburg-based marketing agency well known in the fragrance industry. Through collaboration with them, Santanol has launched their fresh new website, filled with beautiful pictures of the operations that help to tell the Santanol Sustainability Story.

Mercer is incredibly proud of the Santanol team efforts that have gone into the rebrand. Santanol is known in the fragrance industry for its sustainable practices and high-quality oil. This rebrand has not only refreshed themselves in the minds of their customers, but better represents their operations by branding themselves as Pure. Ethical. Sandalwood.

Santanol is a world leader in the production and distribution of pure Sandalwood oil, sustainably and ethically sourced from our plantations of East Indian Sandalwood in Western Australia. Owning and managing the whole process – from harvesting the seeds to distilling the oil – gives us full control over the quality, traceability, and supply.

We are deeply committed to pure and ethical Sandalwood. We accept no compromise in regards to quality, the resources we use, the processes of growing and harvesting Sandalwood trees, and producing our Sandalwood oil. For more information, please visit www.santanol.com.