Mercer Holz is one of the largest timber buyers in Europe, with seven million solid cubic meters per year. For transport, the company is increasingly relying on rail. Over the past five years, more than 500 innovative wagons have been purchased as Mercer further prepares for the future in a climate-friendly way. The use of a block train, consisting of 27 of these wagons, not only carries significantly more wood compared to conventional trains, but also saves 28 tonnes of carbon dioxide compared to transport by road.

“In addition to our awareness of the environment, our focus has been to further standardize our wagon fleet and to use only one type of wagon for all transports,” said Wolfgang Beck, Managing Director of Mercer Holz, standing next to the last train with containers for woodchip transport delivered to Arneburg recently. The new labelling of the containers was also presented at this time, characterized by three core messages:

“Climate-friendly on the road” 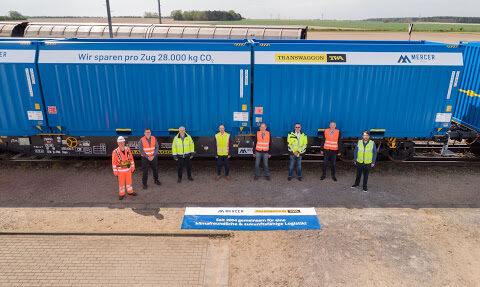 Carsten Schiering, Managing Director of Transwaggon GmbH who delivered the new wagons, added, “The flexible equipment of the wagons and the simple possibility of rail conversion enable Mercer Holz to further simplify the dispatching of its wagon fleet”.

Both directors were referring to the special feature of the wagons, developed specifically with and for Mercer Holz in collaboration with Forstlogistik CH AG of Switzerland. The 63-foot length allows for the installation of three specially designed containers, each 21 feet long. By making the best use of the wagon profile and increasing the size of the containers by one foot, loading capacity increased by over ten percent. This means that, based on the needs of Mercer’s pulp mills in Arneburg and Rosenthal, fewer trains are required to transport the same quantities of raw material. In addition, it is possible to move easily between containers or stanchions for logs, i.e. tree trunks that have been felled and freed from branches. 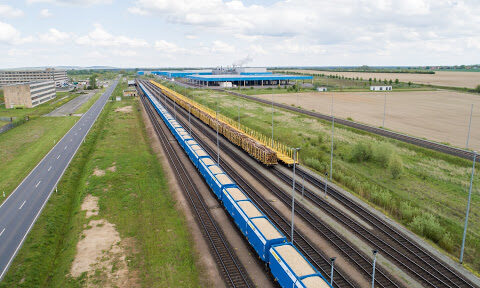 In the partnership between Transwaggon and Mercer, which has existed since 2004, the development of a dedicated freight car fleet for the wood purchasing company has held strong for several years. The first so-called SNPS wagons, which are four-axle bogie flat wagons, were purchased in 2016. Today, the fleet already comprises 350 wagons designed for the transport of logs. Since 2020, 156 wagons for the transport of wood chips have also been added. The standardization of all wagons also simplifies the maintenance and upkeep of the entire fleet. Through their acquisition, Mercer Holz now impressively demonstrates how climate-friendly and sustainable logistics can be implemented.