Amongst the Mercer Forestry Services (MFS) team in Lumby, BC, is Safety Coordinator, Sandy Higgins, whose industry experience has been invaluable to our group. 40 years ago, a young Sandy decided to get her Level 3 First Aid certificate to increase her chances of holding employment during the recession seen in the early 1980s. A few years later she started her forestry career in commercial tree thinning and then moved into the logging industry as a Bucker’s Helper.

Logging was completely different back then. There were no feller bunchers, no processors – the work was mostly manual, with workers relying on hand falling to harvest the trees and line skidders to move them. Her typical day as a Bucker’s Helper would be spent balancing high up on stacks of fallen trees where she ran a power saw to trim truck loads and branches. As you might imagine, the industry back then was extremely high risk, as was the mindset of many workers. 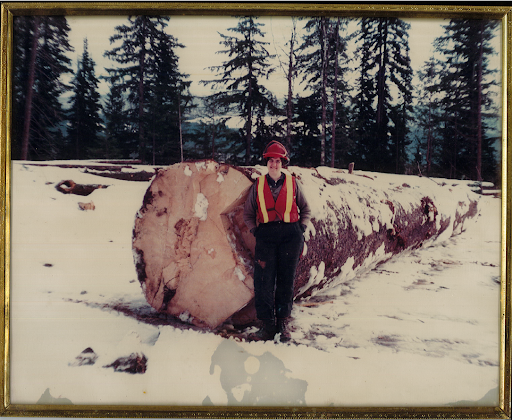 “Throughout the ‘80s and ‘90s the saying was, ‘In for the money, out for your life’,” Sandy recalls. It was considered normal to take immense risks on the job in order to bring home a paycheque. If a worker refused unsafe work – a practice that, today, is encouraged in all Mercer operations to ensure the safety of our team members – that worker would risk losing their job. Sandy’s most memorable and harrowing moment in her career was the first fatality that she attended. In 1991, a hand faller was hit by a snag and succumbed to their injuries.

Today, we know such an accident is entirely preventable; but change comes with time. It wasn’t until years later that the BC Forest Safety Council started to enforce safe certification. This was when the industry started to see a genuine shift in safety culture. Changing old habits can be difficult for anyone, whether it be in management or among workers. In her role as Safety Coordinator today, this shift in safety culture has been Sandy’s most challenging but the best part of her career. To see how far the industry has come is incredible, and being able to be a part of the shift in safety culture has been so rewarding. In the early ‘90s, Sandy saw as many as 2-3 fatalities and 6-8 major incidents per year. Fast forward to today with the MFS team, and there have been 0 fatalities and 0 major incidents this year.

After all these years, Sandy has some simple advice to give anyone interested in getting into the logging industry: be committed. Have the commitment to be able to change your ways. As our logging practices continue to evolve, as we work on steeper slopes, above all have a commitment to keeping each other safe.