On June 3, the Stendal, Osterburg and Arneburg volunteer fire departments conducted an emergency exercise to measure hazardous substances in cooperation with the district’s NBC specialist service and the Mercer Stendal plant fire department.

When bright lights are flashing, sirens blaring, and emergency vehicles carrying people in protective equipment pass by, most people first think an accident or a fire has occurred. For many at Mercer Stendal, this was their first thought as fire platoons from Arneburg, Stendal and Osterburg passed through the gates and onto the scene to support the plant’s fire department already on site. However, it was all a planned exercise to prepare for the mitigation of an emergency.

In the area of the pulp cooking plant, incident commander Gabor Vinzelberg of Mercer Stendal’s fire department instructed the platoons, proactively garbed in special protective equipment, to carry out a hazardous substance assessment. “The aim was to find out whether a hazardous substance was being released,” said Sven Engel, head of the platoon forces from Arneburg, Stendal and Osterburg. At the same time, a decontamination line was set up in front of the building so that emergency personnel leaving the hazardous area could be cleared of dangerous contaminants. 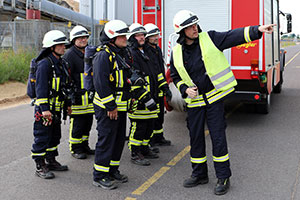 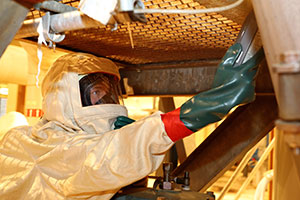 Hazardous material measures are taken in the area of the pulp mill. Photo: Stefan Rühling

Once concluded, the evaluation of the exercise took place on-site. “Production facilities like Mercer Stendal provide our emergency forces with the appropriate conditions to train for such scenarios,” said Armin Vinzelberg. He is responsible for hazardous substances at the Stendal district’s NBC specialist service and acted as an observer of the exercise alongside Mike Wieczorek, deputy head of Mercer Stendal’s fire department. “The platoons did not know the on-site conditions and had to rely on their theoretical knowledge and equipment. We are grateful that Mercer Stendal supports the work of the volunteer fire departments by making such exercises possible,” Vinzelberg continued. “The exercise, in which all forces were concentrated, achieved its purpose,” Wieczorek added.