In the first quarter of 2022, Rosenthal team members got together to investigate “waste” – which for a pulp mill can be quite complex. The following end goals were established to keep in mind during the investigation:

To start the investigation, it was necessary to record all waste from 2021, what types of waste there were, and how many tonnes were generated. Furthermore, the end results of the waste were investigated. What was disposed of externally and what was sent to the company landfill? Finally, the costs of disposal were calculated.

What was found out in the audit?

Types and quantities of waste

The following types and quantities of waste were disposed in 2021:

In total, Mercer Rosenthal generated 31,293 tonnes of waste, of which 26,353 tonnes were disposed of externally. 2021 represented an exceptional situation, as sewage sludge had to be disposed of externally for large parts of the latter half of the year. The reason being was the generator damage the mill experienced. As steam was not used for the generator, its production was reduced. Consequently, Mercer Rosenthal decided not to produce more steam through thermally recycling bark and sewage sludge in the solid biomass boiler (grate-fired boiler) from July 2021 to November 2021.

Normally, the sewage sludge from the wastewater treatment plant is dried to a dry content of 38 percent. Once this is done, it is thermally recycled in the solid biomass boiler, along with pinchips, pin-shaped chips, and bark. With the shutdown of the generator, this was no longer possible and the sewage sludge had to be disposed of externally.

Opposite this, Mercer Rosenthal experienced revenues of 119,274 € for waste, with a large portion of this due to iron and steel scrap.

24,777 tonnes of waste were disposed of externally, 4,940 tonnes were sent to the company landfill site, and 371 tonnes (including 338 tonnes of iron and steel scrap) were sold. This is also illustrated by the following diagram.

Due to changes in waste legislation, only four waste fractions may now be disposed of at the company landfill:

Waste similar to household waste must be collected and disposed of via the municipal waste collection system in accordance with the commercial waste ordinance. For this purpose, there are 29 containers through Mercer Rosenthal in which waste is collected and disposed of every two weeks. In addition, there are six containers with a capacity of 5 m³ on the plant premises. There are also several collection points for yellow bags for packaging waste.

Separate collection by waste fraction applies to all other waste disposals. There are separate containers for each type of waste. Mercer Rosenthal collects a total of 31 types of waste separately. In our recycling yard, there are 16 separate containers in which waste is sorted and collected. 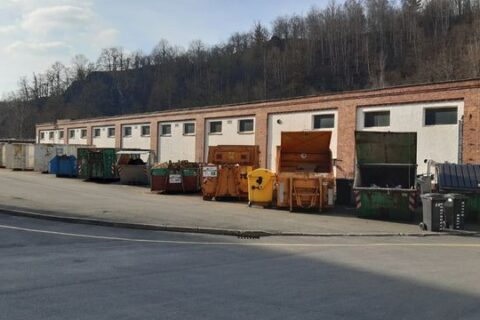 When you do an investigation like this, you will identify areas of improvement. What potentials have been noticed?

As one of the main problems to address, separation by type is the prerequisite for a functioning circular economy. Material separated according to type can be reused, which also results in lower costs. Mixed or contaminated material is usually only incinerated (i.e. thermally recycled).

If we dispose of unsorted material, this causes additional costs – or in extreme cases, which occurred in 2021, even the return of an entire container with subsequent manual sorting.

Not all disposal containers on site are clearly labelled. There will be an improvement here in the very short term.

Unfortunately, things are found on the company premises that have not been disposed of properly. This has included welding rods, cable ties, flutter tapes, and insulation material, as well as packaging, bottles, coffee cups, and cigarettes. This can be avoided and everyone can contribute!

Our target for 2022 has been to, at minimum, halve waste volumes and costs compared to 2021. We will achieve this if, apart from the downtimes of the solid biomass boiler, bark and sewage sludge are thermally utilized and external sludge disposal lessened. At present, Mercer Rosenthal is even investigating whether one or more marketable products can be obtained from sewage sludge. We look forward to sharing our 2022 results and further investigations into the reduction and use of waste in the circular economy.