With our “Road to Zero” program, Mercer is pursuing the goal of zero accidents at all of our sites. To achieve this, there are the Life-saving Golden Rules of safety, which apply like a basic law to all employees and visitors alike. This includes rule number eight: “I report all accidents and incidents immediately.”

An incident report is proactive in that it can result in the elimination of a potential hazard. We recently witnessed a proactive team member addressing an incident that occurred at Mercer Timber Products (MTP) in Friesau, Germany. While on-site, a Mercer Holz employee felt responsible not only for his own safety but also for the safety of his MTP colleagues and fellow MH drivers working on-site.

What happened? While standing in a waiting position during the loading of his truck, the MH driver watched as a wheel loader was loading onto another truck. As he watched, the rear of the loader repeatedly came dangerously close to an MTP building exit. The situation became more precarious when a person stepped out of the exit door and stood directly in the danger zone of the loader’s rear path. The driver quickly approached from his watching position to flag the danger, stopping both the wheel operator and the pedestrian.

The incident was ultimately reported to Mercer Holz through Quentic, a modular, web-based software used by the Mercer Germany group to report near-misses, to eliminate such sources of danger in the future. Once reported, the safety team at MTP was immediately informed and were able to examine the scenario on site. After a brief consultation with the wheel loader driver, a solution was quickly found within the sawmill to eliminate this source of danger in the future. A concrete foundation was erected, separating the footpath from the loader’s working area. 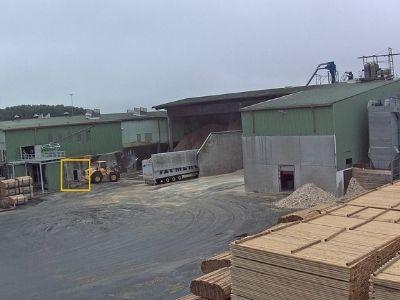 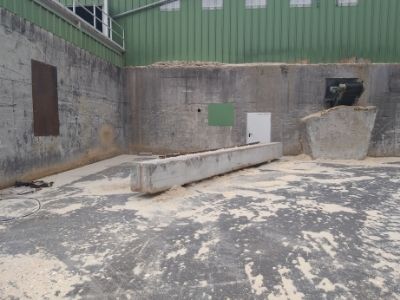 As a whole, in recent years Mercer has realized that large machines in reverse pose a danger to people while on-site. A simple, technical solution was therefore sought and recently implemented for use by Mercer Stendal in Arneburg: rear cameras. Up to three cameras per vehicle have been installed, detecting obstacles behind the vehicle and distinguishing whether that be a person or something else. Once a person is crouching or standing behind the vehicle, that camera sends a signal to the driver alerting them of the situation, visible to them on a monitor installed in the cab, to stop the vehicle.

All in all, this incident in Friesau underscores one thing: reporting near-misses and occurred incidents is just as important as reporting accidents. Reporting the former allows us to research ways that the latter can possibly be avoided by eliminating sources of danger.